Your earliest dream or memory is a map for your growth—use it! 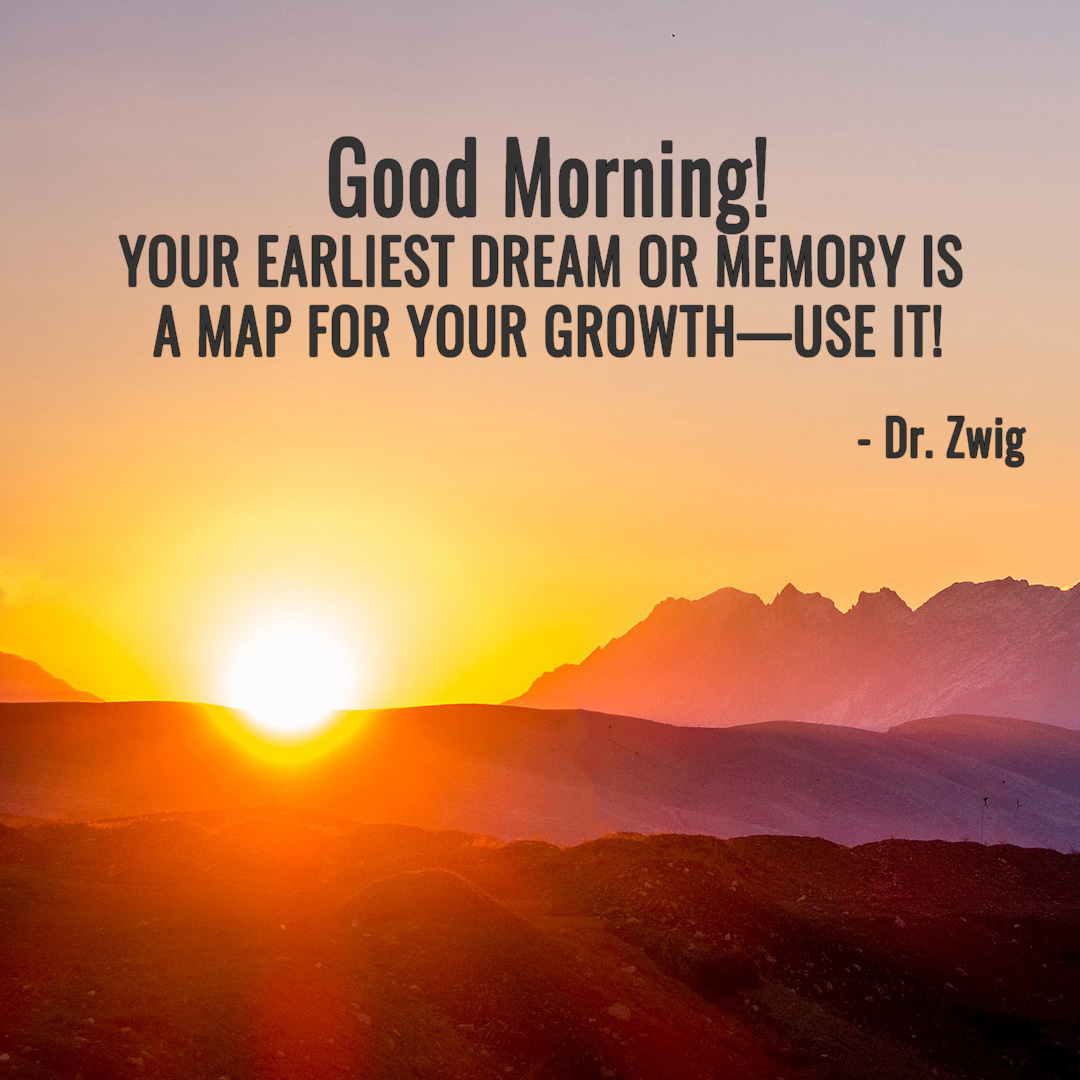 Imprinted in our earliest dream or memory is our entire life’s personal growth task.

Some of this task is inherited and some comes from our childhood experiences.

Working on it can awaken us to the process behind our long-term problems.

Recall your earliest dream or memory.

Identify the most interesting, scary, exciting, wonderful, or unusual element.

If the dream/memory wasn’t so dramatic just identify your core experience.

If the strongest part of it was a person, animal, or other agent, visualize it.

If there were no other figures recall the feeling you had.

Then feel into the figure or feeling. Amplify it. Imagine you ARE it. BE it. Make your mind like it too.

If it’s negative, explore how to use its power in a positive way.

Finally, apply this experience to a long-term problem.

A depressed client’s earliest dream was of a giant dog that scared him. He playacted the dog and connected with a fierce inner power. His depression eventually disappeared.

A client suffered from chronic anxiety. Her earliest memory was of drinking cocoa in her grandmother’s garden. She imagined herself as “cocoa,” and got in touch with a warm, protective part of herself that’s beyond her anxious feelings.

An anxious client lost his brother when they were children. It happened the day after my client pretended to talk to people in heaven, so he thought the death was his fault. I had him imagine being a dead person/spirit and he had a revelation that cured his anxiety: He didn’t cause his brother’s death nor any other catastrophe; he was simply a sensitive psychic.

A client felt trapped in a bad long-term marriage. Her earliest memory was running down a dirt path in bare feet. We reenacted the experience and she connected with her free spirit; she eventually got the courage to leave her husband.

A client had frequent panic attacks. His earliest memory was of being spanked by her mother for breaking a vase. He playacted his mother, got in touch with
being powerful, and learned to use it in a positive way instead of becoming an abuser. His panic attacks ceased.

Your earliest dream or memory is a map for your growth—use it!

Meet Dr. Adam Zwig—psychologist-musician, educator, and author. He holds a PhD in clinical psychology, has had 9 Top Ten hit singles on the U.S Adult Contemporary charts, and is an internationally renowned workshop leader and lecturer. He has been featured on Billboard, SiriusXM Radio, CBS Radio, and many other stations, and in People Magazine, Pollstar, and many other publications. Dr. Zwig has released 7 albums, has songs on NBC, Fox, and Fuel TV, and has garnered over 150 million views on YouTube. His forthcoming book, Music in the Mayhem: Tales of Total Transformation from a Rock n Roll Psychologist, shows how life problems are not pathological but rather personal growth processes trying to happen. His podcast, The Dr. Zwig Show, posts new episodes every Wednesday.